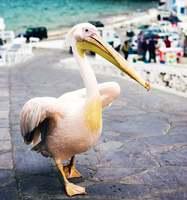 The Pelican of Mykonos, Cyclades: The Pelican called Petros (Peter) is an integral part of the island of Mykonos and rightfully it has become the mascot of the island. You can get a glimpse of the cute creature as it strolls leisurely in own unhurried pace through the city's many alleyways. Although it is particularly fond of the harbor area along with Alefkandra area. Everyone in Mykonos including visitors from abroad adores and admires the pelican. For the children, the pelican is their much-preferred playing partner.

Petros the Pelican has been officially declared as the mascot of Mykonos. He has made Mykonos his home since 1954. The original Petros passed away after spending a long thirty years in this enchanting island. It loss was deeply mourned by the people of Mykonos that without wasting much time they introduced a substitute and the tradition was honored.

The pelican is the cynosure of all eyes as far as the island of Mykonos is concerned and the saga of Petros lingers on. Mykonos many waterways provide the cute creature with the perfect setting to indulge in fun and frolic which is much appreciated by both the residents and visitors alike who never seem to have enough of the pelican.

Legend has it that more than 40 years back a Mykonian fisherman stumbled upon a wounded pelican. He was so moved by the pelican's discomfort that he decided to take care of the Pelican, provided the cute creature with medication and once he regained his strength decided to set him free. But surprisingly, the Pelican did not become airborne to his destined abode. Instead, he made Mykonos his home. With every passing day, the cute creature became the cynosure of all eyes and became a celebrity.

It came as no surprise that when the Mykonos pelican died way back in 1986, the whole of Mykonos went into mourning. It took a person of the stature of Jackie Kennedy-Onassis to come to the rescue of Mykonos grieving populace and the compassionate Jackie Kennedy-Onassis rightfully donated another pelican to the island, Irene. It is said that the Hamburg Zoo had also donated a pelican named Petros.

A few years back, there was an instance of another injured Pelican found in Mykonos by the local people who nursed it back to normal. They named the Pelican Nikolas. Now, in Mykonos, there are not one but three Pelicans that can be seen wandering about Mykonos harbor.